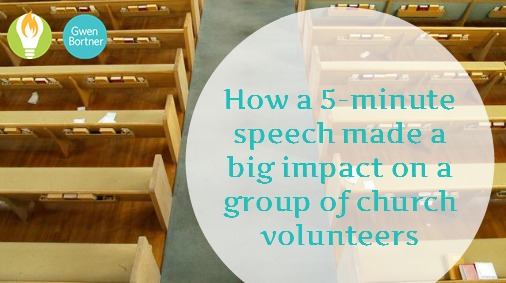 Last week I attended my church conference not as a representative of my local church, but instead as a representative of our district which is composed of approximately 85 churches. In this role, I was asked to speak briefly to all of the laity (non-clergy) in attendance. What made my talk different than the other three given during that session was that instead of being inspirational, it was a mini-class.

This happened primarily because I was given minimal notice and when in doubt, I revert to “teacher” mode. After years of practice, if I possess the minimal amount of knowledge required, I can probably do a reasonable job of teaching the subject. And so when choosing to speak on a topic, I almost always choose an instructional message versus an inspirational message – even when speaking at church. But there is power in this approach.

What I discovered from this experience is that most people are interested in learning and improving. This is particularly true when what is being taught has proven results. The reason I know this to be true is that throughout the next 3 days, several people stopped to ask me about the details of my speech and made specific comments referencing what I had shared.

What I also discovered to be true is that people want to be led by example. Or to say it in a slightly more churchy way, “you’ve got to walk the walk, not just talk the talk.”

The message I shared was a leadership idea that I had implemented several years prior when my role was associated directly with the local church congregation. People connected not only with the idea, but more specifically with the results the new process had generated. So instead of the message being “you should try this,” it was, “I have done this and it works.”

Another reason my message had power was that my audience, most of whom were local church leaders as well, could relate to the problem being solved. Based on my conversations afterwards, many were living with the exact same challenges I had been dealing with when I implemented this new process at my home congregation.

Ultimately my five minutes in front of the microphone taught me three important lessons both as a leader and as a speaker:

So if you’re ever faced with an opportunity that comes with very little prep time, don’t be afraid to go for it! Think back on the lessons you’ve learned that might relate to your audience or topic, and talk about one. People love to hear success stories and to get specific examples for how to improve their situation. And you never know when a 5-minute speech from you is going to be just the message that someone else needs to hear.

What’s the last lesson in leadership YOU learned? How could you share that with others?

If someone asked YOU to give a speech with little to no preparation time, could you do it? Or would you have to let the opportunity pass you by because you wouldn’t know what to talk about?

Don’t get caught unprepared – get my FREE worksheet to help you come up with a ready-to-go list of speaking topics you can keep in the back of your mind for just such an occasion.