Why Being Smarter Isn’t Enough 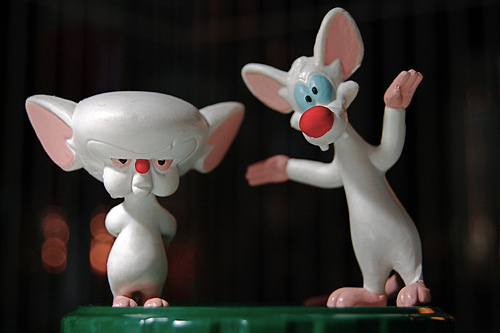 Even though I don’t have kids, that does not stop me from watching (and thoroughly enjoying) lots of cartoons.  One of my favorites in the mid to late 90’s was Pinky and the Brain by Warner Bros. The premise of the show is that two genetically altered lab mice share a cage (and are friends). Each episode began with the following dialogue sequence:

Pinky: “Gee, Brain, what do you want to do tonight?”

Brain: “The same thing we do every night, Pinky—try to take over the world!”

And thus the story began!

Each episode featured some crazy scheme which always failed, often due to Pinky’s ineptitude. But what I loved was the subtle message that was always present about attitude: Brain was smart, but sometimes being smart is just not enough. Brain’s real gift was his unending persistence; no matter how many times he tried and failed, the next night he would try again. It was much like the famous quote attributed to Thomas Edison:

Pinky also had a great message about attitude, one which personally resonates with me: a little bit of optimism can go a long way in making a day better.  Pinky may not appear as smart as Brain, but there is a lot more going on up there than he gets credit for. Pinky’s real gift, though, is enjoying the present, finding the best in any situation, and a general ability to find joy in the simple things.

What did I learn as I spent time watching children’s cartoons, decompressing from my “high-powered” job in corporate America? Being smart just isn’t enough. Success also takes hard work, a willingness to try (and possibly fail) and tenacity to continue, even when your goal seems unreachable. And it doesn’t hurt to have someone by your side who believes in you, supports you, and can maintain a positive outlook. Persistence and optimism can be the keys to success.

So which are you? Brain, always striving for your dream, or Pinky, enjoying where you are now? Or are you a little bit of both?